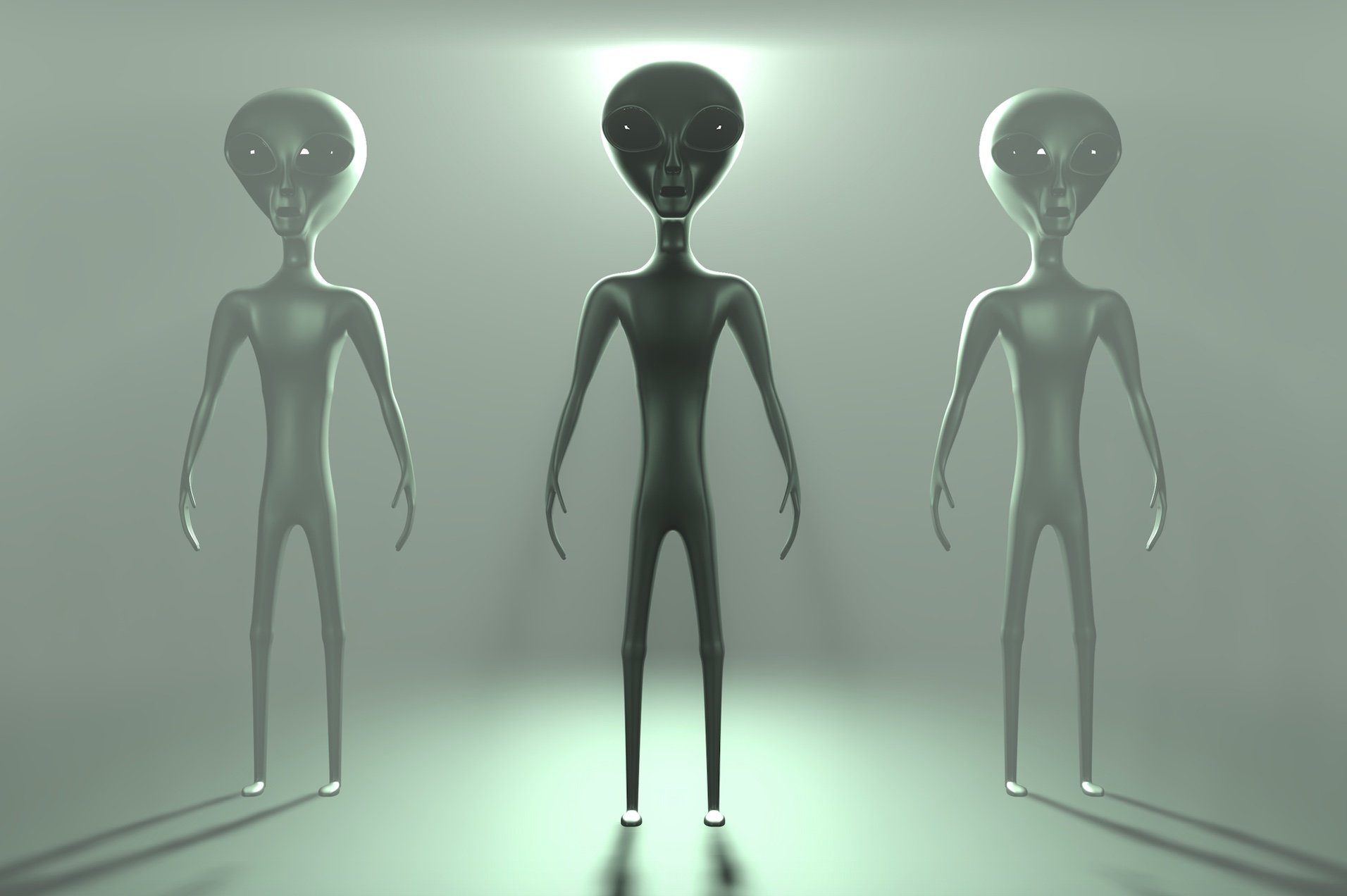 People at home either asleep or awake, will suddenly feel a presence and before they figure out what’s going on, small alien beings are there with them.

We’ve interviewed a multitude of contact experiencers at Aliens Revealed Live just in the past year who have reported this exact first contact scenario.

Beings showing up as one experiencer said…”almost out of thin air but totally benevolent and always with a message”.

So what’s going on? Are we looking at the confirmation that yes, we exist in one dimension surrounded by many other dimensions?

Are these beings able to slip in and out at will, make themselves known and then vanish again? It seems so.

Annette Williamson didn’t ask to be contacted. Her journey of contact started through a friend and as she put it, it came out of nowhere.

She remembers clearly. It was October 18th, 2017 when her life would change. Williamson was flipping through Facebook when she noticed her friend Zoe had posted a picture of an alien.

She described it as a little alien with a big head and a small body.

That wasn’t such a big deal as she had seen images of aliens before. But what really got her attention was the caption underneath the picture which read:

Humans are you ready!

That seemed to ignite an insane curiosity within her that she simply had to explore further.

She called Zoe and they spoke about the picture. Williamson wanted to know more and was invited by her friend to visit her at home and she would explain everything to her.

The image of the alien or aliens in general that Zoe posted on social media was “totally unlike her” according to Williamson. It piqued her curiosity.

Williamson knew this was out of character for Zoe and what she was about to learn was the beginning of a change in her own life.

“I remember it just caught me by surprise as I thought it’s so unlike Zoe to write anything like that. It’s just so unlike the sort of thing she’d put up”.

“I hadn’t spoken to her for months. So I phoned her immediately and said, ‘what… what’s going on? What is this picture’?”

“And she said ‘well, over the weekend, my alien family showed up”.

“And I remember getting this real feeling of excitement and thinking, ‘oh my gosh…my friends are seeing aliens. I’ve got to go and see what this is all about’!”

Zoe then explained to her that over the previous weekend, she was in her sitting room having a cup of tea when she felt a presence.

“In the evening, she’d gone downstairs. She was in the kitchen and she felt the same presence. But this time she looked up and she said there were three beings – little small beings standing in the hallway”.

“And then they spoke in her mind and said, ‘pick up something and draw us. And if you draw us, you won’t be scared of us’.”

It was the catalyst for many conversations Williamson herself would have with the beings. First through her friend Zoe and then telepathically on her own with them.

It was a time of reprogramming for her as she was being told things that simply went against all she had been taught.

The information relayed to Williamson from her alien friends, most of the time, didn’t make sense to her. It seemed to go against the normal grain of what we humans understand as reality.

“This was the start of many conversations channeled at first through Zoe before they showed me how they talk to me telepathically”.

“I had so many experiences in the first three months. They explained so many things to me”.

“I experienced astro-traveling; they explained what dimensions are. Then they said time is man made and that there’s no history as it’s always changing and man made”.

They said numbers are man made and that there’s only the 0 and 1 and all numbers after have been separated”.

“They told me that there are new super humans coming with DNA upgrades as each generation is different from the one before in repeated cycles”.

“I was told we are all one creation and that both other ET beings and humans are made in consciousness”.

“Then they said earth has no shape and it’s all in the eye of beholder”.

“Each energy experiences its own reality in illusion; earth is multi dimensional and there are humans we have forgotten. The alien beings said it happens over billions of years”.

“They left in that form at the end of January 2018 to visit other people for a consciousness shift taking place”.

They said that humans would soon experience an upgrade in oxytocin for a new reality that is coming – a time of love and sharing”.

“All other alien beings connect to humans in consciousness as consciousness is all there is. And they also said that my grandson will experience a different reality to me”.

Alien Beings Spill The Beans On Our Real Existence

Williamson says there is so much more she could share. She describes herself as somewhat dyslexic but she still writes everything down.

She has a daily account of her interaction with the beings from another world and draws most of her conversations. Her first conversation was with her friend Zoe and it accelerated from there.

“Gosh they shared so much. The first conversation started with the three beings asking me a question”.

“Haven’t you had enough yet?”

“I had no idea what they meant but before I had time to ask, they asked the next question, ‘What do you humans think happens when you pick a flower’?”

“Both Zoe and I just looked at each other and replied, ‘it dies and goes to compost’.”

“The three beings replied, ‘No. Nothing dies. Energy can’t die – it can only change form”.

In the following excerpt from my interview with Williamson, she discusses her initial interaction with the alien beings during the first three months of contact. What they reveal to her about us and our existence is remarkable.

2 thoughts on “When Alien Beings Show Up Unannounced – Is It An Epidemic?”