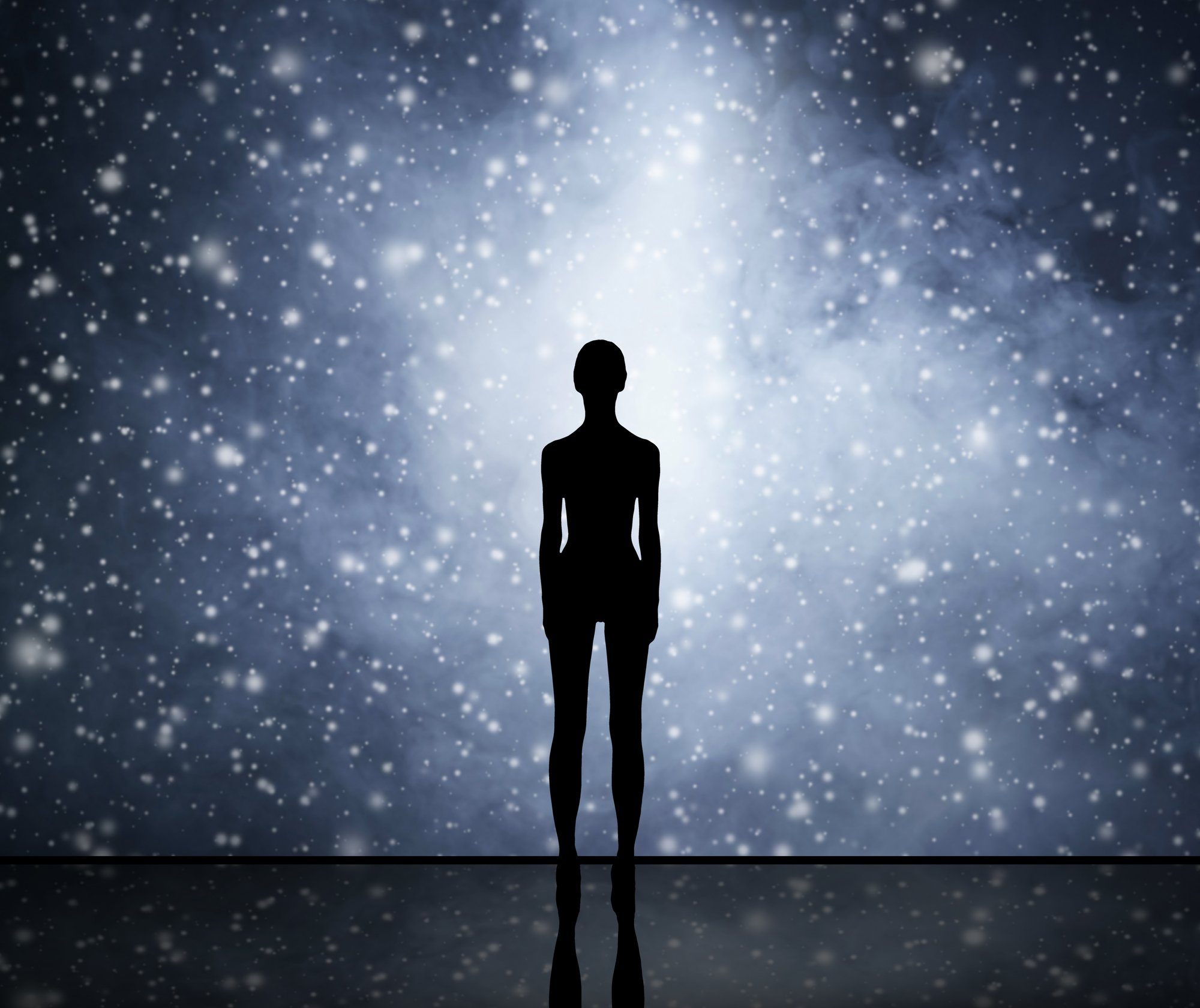 The first of Fay Vales’ UFO encounters occurred in 1965 at the age of 21 in Braunstone Frith in Central Leicester, England.

It would be the first of many alien encounters which would turn this self-confessed “Mrs Ordinary” into an extraordinary artist.

How? Only she can describe how but consider she had no interest in picking up a pencil or a brush before her sudden compulsion began in 2007.

It seems there was a purpose for Fay Vale following each of her UFO encounters.

Following her first experience she began to become aware of spirits and other energies and developed a strong interest in the paranormal.

Vale’s second UFO encounter happened in 1969 and this is when she became hooked on the UFO subject. The first encounter is always special and the one that sticks in the mind of many experiencers.

“The more I thought about space and UFOs, the more I remembered my first encounter. Up until that point I had never told anyone as I did not expect people to believe it”.

By the time she had moved to Boston in Lincolnshire in 2001, “Mrs Ordinary” was deep into UFO activity.

She had also experienced many sightings as well as several ghostly encounters. While these are extraordinary experiences for most people, what was to follow certainly made them pale into insignificance.

But right now, nothing out of the ordinary yet. Then her life changed completely in 2007. She learned the reason for her UFO encounters and one especially on a night in 2007.

After leaving a gathering of like-minded people within her sphere, sharing phenomena caught on video and messages caught on tape, Vale and a friend got in their car and began winding their way through unlit narrow country lanes.

Encounter With UFOs Left Her With Special Abilities

It wasn’t long before they saw a very bright white light traveling towards them at a furious speed.

“We thought it was a car with the headlights on full beam and slowed to a crawl. At that moment a white owl suddenly flew across the windscreen and into the trees beside me, making me jump”.

“My friend commented that it was unusual for that area. As our eyes went back to the road we realized how fast the light in the distance was coming at us”.

“It was round like a spotlight, but what struck me as strange was that it was incredibly bright, yet you could still look at it”.

“It was now filling the whole road and becoming brighter than ever. At this point, it was so close that we thought it was going to hit us so my friend slammed on the brakes and we lurched to a standstill”.

“Immediately the object shot backwards and disappeared in seconds. We looked at each other dumbfounded”.

Again, while unusual, it appeared as if she had experienced just another one of the many UFO encounters people report on a daily basis.

But this one was to have a profound impact on Fay Vale’s life. At age 63, she had suddenly developed a compulsion to draw with her left hand. Bear in mind she is right-handed.

“At first it was just scribbles, like a two-year-old. And then one day a shape appeared – a fish. Then it became military-oriented, with things like tanks, submarines, warships, airplanes, landing strips and war graves”.

“This was bizarre and nothing I had ever had any interest in. Following the airplanes, I then drew rockets and launch sites, and then progressed to drawings of UFOs, UFO ‘route maps’ and space stations”.

“And as all of this was going on, I also began getting strange luminous lights in my bedroom at night”.

“I was woken up every night by small Grey beings in the bedroom and little robotic kind of beings. Sometimes I would be visited by flashing orbs of light”.

There are times when the physical evidence of her alien encounters is evident.

“I have woken up to bruises, triangle shapes on my shoulders, and even having the feeling of something tugging on each of my toes”.

“This got so intense at one point that I became afraid to go to bed. Although I shared my bed with my husband, he never woke up and was unaware of any of this”.

“I had not told him about the drawings at that point”.

“The methods used to introduce me to this work were very clever. They began with recognizable objects; machines and vehicles used in war, before progressing me onto rockets and finally UFOs”.

“As I had no control with my left hand, it was a clear channel for the beings to work with. They knew that if I used my dominant hand to draw, my mind would automatically control the image”.

From UFO Encounters To Art Genius 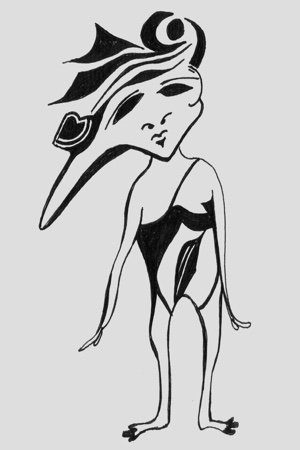 Thirteen years and 2000 images later, Fay Vale is still drawing with passion. She’s recorded a lot of her artwork in a book titled ET As Artist with the help of researcher and author Miguel Mendonça.

The main theme of her channeled images are ET beings, animals and messages.

She responded to several questions from Mendonça, one which revolved around the relationship between ETs, animals and humans.

“The relationship is that we are all in a program of evolution. Contact, abduction and animal ‘mutilation’ are all part of a process of experimentation aimed at adapting us all for life on other planets”.

“Through genetic development, including hybridization and DNA activation, more beings and animals can be blended in order to live on what would otherwise be uninhabitable planets”.

“But it is wider than that, and is about adaptation and growth in all aspects of evolution”.

Why Was She Chosen By ET?

Vale is not sure why she was chosen to do this work. She had never picked up a pencil before it all began. She says if she had an art degree, then she would likely be critical of her work and be tempted to alter them.

“I just accept that even if a line is suddenly drawn in an odd place which alters the image I have to leave it as that’s where it is meant to be. Usually it all falls into place as the drawing is completed”.

Vale says it’s like the energy is in the room when she’s drawing.

“Some drawings come with a feeling of being extremely hot as the energy seems to have a heat of its own”.

“Other times I have felt uneasy with the energy that is drawing and stopped and asked it if it comes from the pure white light”.

“If it is a dark energy, then usually my pen will just scribble all over the drawing and I will stop and say out loud, ‘I am not drawing for you.’ I have to be aware that not all images come with the right intention”. 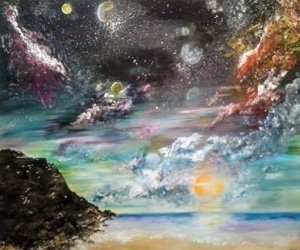 Before she starts to draw, Vale says she has no image at all in her mind and every piece comes as a complete surprise to her.

And outside the drawings, there are communications with ETs and the messages range from receiving a knowing of events that are going to happen to the progress of mankind.

“I do still get energies in my bedroom at night which usually start as a luminous green light. Also, I occasionally wake up with bruises and strange marks on my body”.

“I just accept this as I am part of the ongoing progression of evolution and that experiments will happen that may leave evidence. If this does happen, they usually disappear within a couple of days with no pain”.

“They are pure consciousness that want to be recognized as an image. They usually leave a kind of signature at the completion of the image and thank me for allowing them to be drawn. I understand this as when we dream we are always aware of what’s happening and our surrounding view, even if we can’t see our body”.

The Message In Fay’s UFO Encounters?

Was there a message that Fay Vale was able to discern from her experiences?

“The message is that in order for us to coexist, to work and evolve together as one, we must communicate in any form that is available”.

“And I find art is a universal language without barriers; it simply enters your consciousness, on multiple levels. For the ETs with something to share, this is an excellent method”.

UFO encounters come in all shapes and forms…from sightings to ET contact. When Vale spoke about being chosen to express ETs messages through art it surprised her”.

Despite never ever having picked up a pencil, for some reason it took her thoughts over to a famous book.

Throughout its writings, men and women were chosen to perform feats or deliver messages despite having no qualifications.

Funny that. I wonder which book I’m thinking about?

Fay Vale calls her pieces Galactic Art because she says it comes from other planets and dimensions. Click here to learn more about Fay’s amazing artwork. Fay’s book ET As Artist is available online.