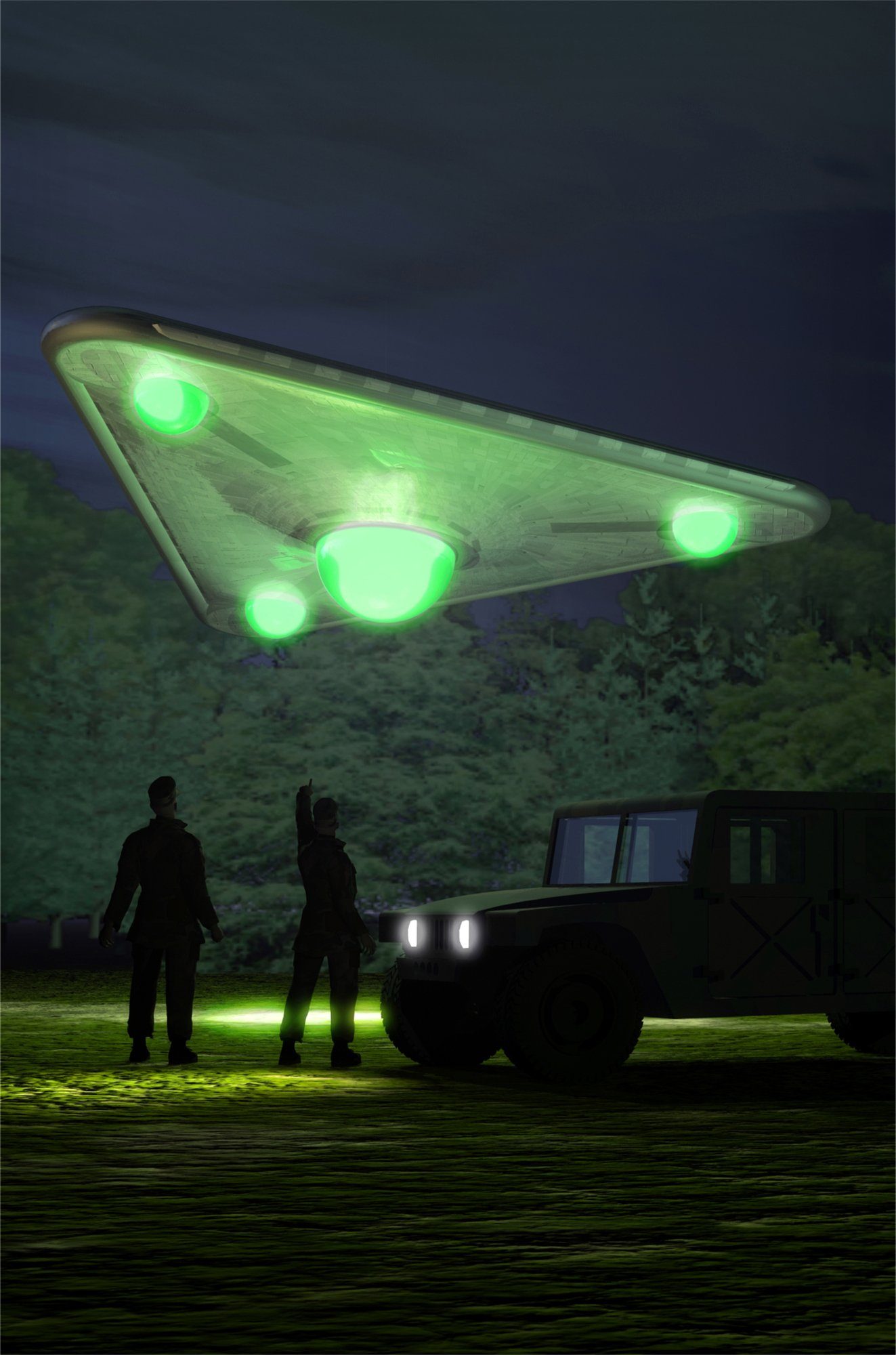 Terry has been doing hypnosis work with abductees/contactees for many years and the following account is quite frightening.

It’s not a well known ET encounter but it’s a true alien abduction story that with a little publicity, would have rivaled some of the most famous cases given the confronting nature of the details.

There are no alien abduction pictures to present here, there never are, and it’s always left up to the reader’s imagination to picture what took place.

Terry Hartman’s account of what Darrell and Tony, (the abductees) went through doesn’t require much imagination to visualize the terror they experienced.

This is Terry’s account following hours upon hours of hypnosis therapy.

It was on a beautiful autumn Sunday in Portland. My phone rang about midday and on the other end was a lady who appeared rather hysterical.

She said her name was Tony and she and her husband, Darrell, needed to see me immediately. (At that time Darrell was employed as an auto mechanic and Tony was a school teacher.)

Tony said she heard of my hypnosis work with purported alien abductees as well as other clinical conditions, but was very hesitant to say much.

We talked for about an hour in generalities and then she invited me to come to their Beaverton home on Monday.

Their home was very modest and not far from the Nike campus. Upon entering I was greeted by Tony and Darrell and asked to sit in the living room.

What presented itself as a possible challenge with them ended up on a more positive note.

It appeared that an incident had happened to them on a fishing trip to the Steens Mountains in the southeast corner of Oregon over ten years ago.

Because they could not agree between themselves what had actually happened.

The fact Darrell was recently fired from his job due to recurring stressful nightmares; this ten-year old incident created a great deal of friction between them.

Our discussion in the living room was defined by coffee and cake and lasted six hours. The entire discussion was about them checking out my credentials and if I worked for the government.

I explained my involvement at the time as Oregon State Director for MUFON and Hypnosis Consultant, a consultant to the Oregon State Police in UFO reports, my affiliation with APRO (Aerial Phenomena Research Organization) in Tucson, of NICAP (National Investigative Committee of Aerial Phenomena) in Maryland, GSW (Ground Saucer Watch) in Phoenix as a Hypnosis Consultant Investigator, CUFOS (Dr Allen Hynek’s group Center For UFO Studies) in Evanston, and my own UFO Research group, IUFORA.

I had nothing to do with the US Government.

Tony and Darrell wanted me to commit to not using their last name for profit nor for me to report to the US Government.

I agreed. I asked them not to discuss our hypnotherapy sessions with anyone, including themselves.

They agreed. Then the real work was to commence the next week.

It’s important to note here for practitioners of hypnotherapy that you must create a professional, trusted bonding with your clients.

You could face some tremendous obstacles and allegations if you cannot accomplish this in the first meeting.

And I suggest highly if you do not possess some degree or experience in Metaphysics  and the Paranormal to not get involved in UFO abduction cases. They are the most intense of all philosophical applications in hypnotherapy.

One Of The More Chilling True Alien Abductions

The Steens Mountains in SE Oregon are basically uninhabited, rugged, dry, steep and are only frequented by the average rancher, hikers and antelope hunters.

It was Darrell and Tony’s favorite getaway. They could camp and fish in the valley catching large trout without interruption.

But it was about to become the scene for a true alien abduction story that seems as terrifying for the abductees as any we have heard before.

They had some paranormal anomalies with UFOs in the past such as when they were camping in a tent on top of a Steen’s bluff to find themselves hearing a hum in the middle of the night.

Upon going outside to what the sound was, they found that they could not see the nightly starred sky because of a huge, black triangular craft hovering over them.

A number of anomalies have occurred to them. However the experience they called me about would lift the hair off anyone’s neck

Terror In The Steens

It was hot in the Steens in July when Tony and Darrell pulled their 16-foot runabout boat to go trout fishing. Snakes and heat were rampant.

Their truck heated up and the radiator gushed steam past the hood. They decided to wait out the cooling of their truck and sat under old, shady cottonwoods.

That is all they remembered until three hours later.

Both Tony and Darrell said that while they were waiting for their radiator to cool down, they witnessed what they thought was a plane crash across the ravine. At the time they said that it was interesting.

Only interesting? No sound or flames. Nothing to think about until they realized their truck had cooled down.

However, they had no recollection of being gone from the vehicle for three hours.

What followed with my association with Tony and Darrell was over 60 hours of intense hypnotherapy with each of them at their home for months.

Each week I worked with both of them separately in two-hour sessions.

I gave them the suggestion to not talk with anyone about our work, and as far as I could gather by cross-examinations, this remained true for the whole period of hypnotherapy.

Here are the results:

Darrell: Under hypnosis he remembered seeing a bright, shiny, silver craft crash into the hillside. He felt compelled to walk to the vehicle leaving Tony behind without discussion.

When he arrived at the craft he noticed it was undamaged and was a seamless silver, oval shaped object.

Upon touching the object, he remembered it to be smooth and cool. It felt like Teflon. A door opened and a set of steps came down off the vehicle.

Again, he felt compelled to walk up the steps.

He was now in a dark, psyche type of room with panels of lights and gadgets.

A taller alien communicated to three others in a sound of “buzzing bees”.

They looked like little grey people with no ears and large heads; nothing like he had ever seen before in movies or books.

Darrell thought they were wearing suits or had wrinkly skin. Now naked, Darrell ‘floated’ down on his back to a cold, stainless steel type of table with scary instruments hanging over it.

Long needles were stuck up his nose and his genitals were examined with forceps. A 35-year old pain from a chipped right elbow was repaired instantly with the touch of an alien’s two-fingered hand. He had suffered this injury as a result of falling off a swing set at age 14.

Until this experience he could never straighten his arm.

The next thing he remembered subconsciously was being back at the cooled down truck.

Tony was missing however, it did not concern him.

Tony: Consciously she remembered an old WWll type bomber crashing into the hillside. (It is common for people to have different experiences even though the same occurrence might have happened.).

Under hypnosis Tony recalled walking to the same object Darrell detailed. Although her husband was not in sight, it did not bother her.

She too went up some stairs into a similar room and underwent similar painful procedures.

Needles were inserted into her female organs, extracting fluids and she seemed to be attached to some remote hand-held monitoring device of an alien.

They talked to her with similar “buzzing bee” sounds, yet she did not understand the communication.

Tony’s said the aliens had dark grey skin like an elephant. They were short; about four feet high and had sunken eyes, holes for a nose, no ears, a slit for a mouth and looked to her like dried apples.

Their heads were large and their hands had two long appendages with a nub like a thumb.

Like Darrell, Tony found herself back at the cooler truck some three hours later to find him under the trees asleep.

However unlike her husband, Tony would eventually find a triangular red mark on her hip that lasted for years before it faded into a birthmark type of skin discoloration.

Not knowing what really happened to them, Darrell awoke and agreed with Tony that they must have napped for a few hours.

The truck started right up and off they drove to their home some eight hours away.

They did not speak with each other the whole trip. Nor did they ever discuss the abduction incident until contacting me several years later.

After months of intense hypnotherapy it appeared that Darrell’s depression would now be over even though he is still confused to what actually happened to him. He is in better spirits using his arm in every normal way.

As far as the incident that occurred to him in the Steens years ago, he would rather not discuss it.

Tony on the other hand has become very intuitive and clairvoyant.

One thing of importance is that when Tony was under hypnosis she would comment on “they’re here’ meaning one or more aliens would come into the room, invisible to me; yet I could ‘feel’  the alien’s presence.

Yes, it was stressful.

Tony hears the ‘buzzing’ sounds now and understands them. They told her that they were aware of my work with her and it was OK! Her discussions of the events with Darrell are still not a part of their lives.

Presently Tony is working with a spiritual church and is helping people conquer their own challenges.

It would be easy to say that Darrell and Tony created this story in their minds. However, that would not explain a number of their experiences nor the triangular mark on Tony and the use of Darrell’s arm.

A true alien abduction story? It’s hard to argue against. Statistics are proving that these type of extraterrestrial encounters happen more frequently that first thought.

You can connect with Terry Hartman Hypnosis on Facebook or Google or email direct at: metaphysicalhypno (at) gmail.com. Terry is available for presentations and private sessions for groups or individuals.