Calvin Parker and Charles Hickson became part of one of the most spectacular true alien abduction stories in history.

Parker and Hickson were abducted by aliens in Pascagoula in 1973 and their alien abduction story made headlines around the world.

Many reported UFO encounters are slowly forgotten over time but Pascagoula appears to have attracted a new audience. Because it happened so long ago, there’s always a chance people will forget it. The Pascagoula Incident is now at the forefront of famous true alien abduction stories.

The new documentary will help keep this UFO story “front and square”. The Betty and Barney Hill abduction in 1961 and the Travis Walton abduction in 1975 are exceptions.

The Travis Walton encounter was made into a full length feature movie titled Fire In The Sky but has copped criticism. Parker says he has spoken with people in Hollywood in regards to making a movie on the Pascagoula event.

He is hopeful something will happen in the near future but is mindful of not straying away from the facts of what happened to him. 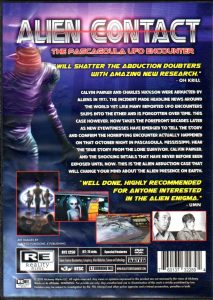 New first-hand eyewitnesses have emerged to tell their story and they confirm the horrifying encounter actually happened.

Parker spoke during Aliens Revealed Live and had the audience memorized as he gave a graphic account of the abduction.

Parker also spoke at length about the new evidence which has emerged.

With the help of UFO researcher and author, Philip Mantle, its given the Pascagoula case a “new lease of life”.

A whole new generation of fans are now joining in on the discussion.

Calvin Parker laid low for a long time after abduction. If not for Philip Mantle’s fearless pursuit of new evidence, Parker may have decided to never speak about it again.

Pascagoula:The Story Continues was the follow up book and was published a year later in 2019 featuring the new evidence.

The following excerpt is from my interview with Calvin Parker as he talks about the new evidence which has emerged. The Pascagoula incident has become one of the most riveting and spellbinding true alien abduction stories in UFO folklore.