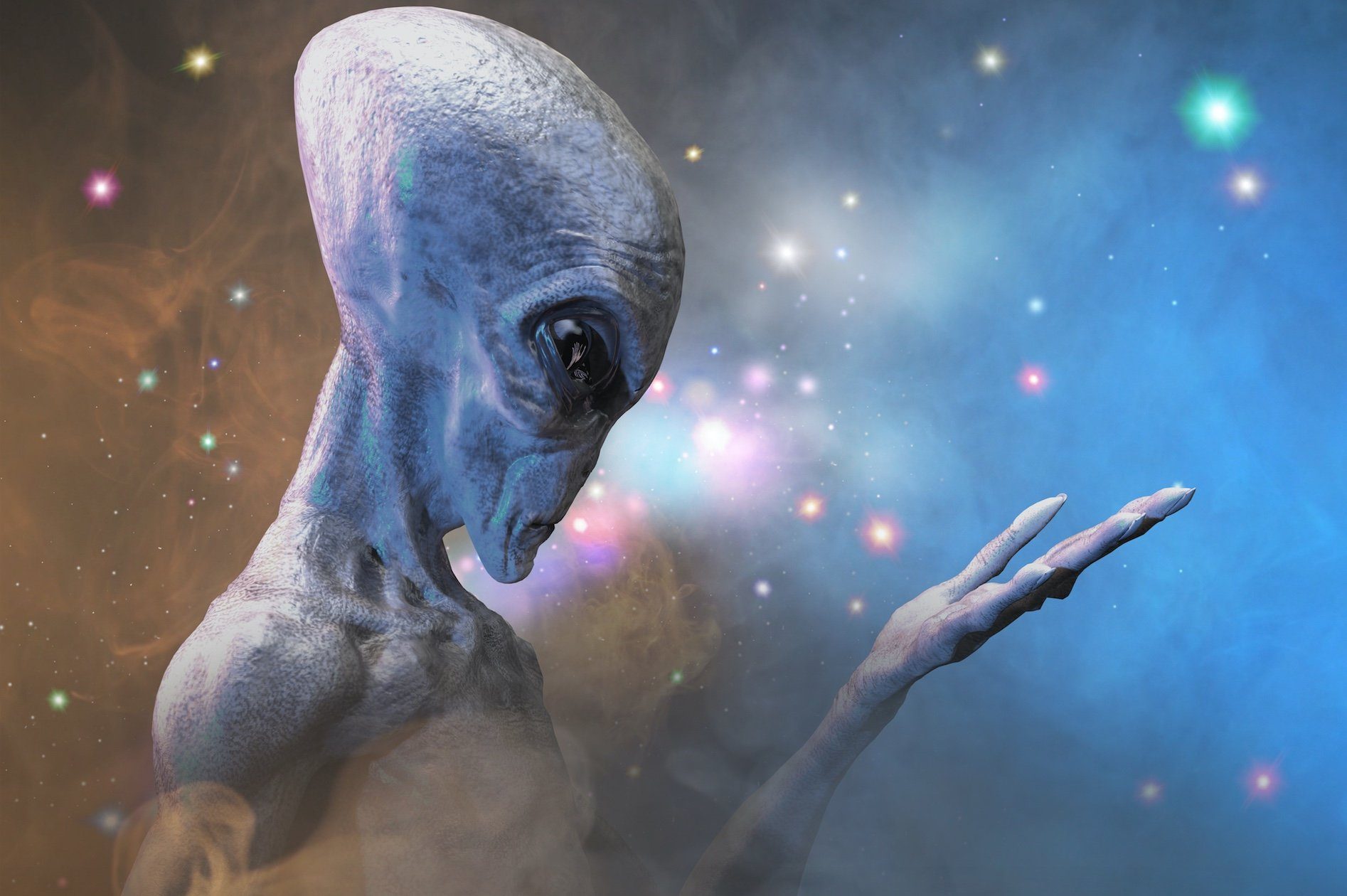 The grey alien agenda on earth has been debated long and hard. There’s plenty of confusion about who they really are.

Some argue they are malevolent while others say they are benevolent beings. Then there’s an argument that they are really the “worker bees” for other species while another theory is that they are machines.

Nigel Kerner caused a stir when he released his book, “Grey Aliens And The Harvesting Of Souls” in 2010. This article heads down a similar path with testimony from a contact experiencer in communication with the Greys.

Whatever or whoever the grey alien is, they have been a constant source of fascination in the world of ufology ever since they were first identified.

In fact, whenever the word alien is mentioned, most will have a picture of a grey alien in their minds with a large head and big black oval-shaped eyes.

Lifting The Veil On The Grey Alien Mystery

TJ Bronson is a lifelong experiencer and says he has been contacted by three different species in his lifetime.

One of them is the grey aliens. In a frank interview with Aliens Revealed Live, Bronson lifts the veil on who the Greys really are and what their agenda on earth is.

Read this with an open mind and decide for yourself. One thing I will say is, Bronson has given one of the best explanations of why people are being abducted.

And it involves the most precious asset we have as humans.

“All of the conversations with the Greys are telepathic. Their actual language is very complex when it comes to verbiage. They provided most of the dialogue”.

“In essence, it was more them speaking or communicating with me in our english language”.

“Their thought process is unlike anything we have ever experienced”.

“Their ability to learn other languages is as easy as you and I walking”.

Are There Other Species Working With The Grey Alien?

“The grey aliens are working in unison with other species, specifically the reptile or the Dracos from the Draco constellation”.

“The Greys are scientists for the most part exploring and learning about other species through  experimentation of DNA chromosomes and biological functions”.

Exploring The Soul Of Humankind

The soul is the precious asset of each individual on this planet. But it seems it’s also attracted the interest of non-human intelligences.

The following may challenge your belief about the Grey and why humans are a constant target for abduction.

What Is The Grey Aliens Fascination With Humans?

“The Greys have a fascination with our life force or what we call our souls”.

“They are obsessed with trying to capture it and duplicating its energy. But this is something that they cannot figure out completely”.

“This is why they continue to collect human specimens to help them better understand us and our life force. Some of this will make sense later when talking about the Andromedans”.

“In essence, the Grey’s intentions are to remove the soul of a human to better understand the Andromeda connection which the Greys believe is where we originated as a species. Or as we know and call it, heaven”.

Is The Grey Alien Species A Hostile One?

“Although this experimentation sounds quite malevolent, as a whole, the Greys are considered benevolent by our government”.

“An arrangement has been made to exchange humans for technology. This of course is not news to those privy to know the truth”.

“In comparison though to other species such as Insectoids and Reptilians, the Greys are very docile, despite their experimentation agenda”.

Are Humans Hurt During The Grey Aliens Experimentation?

It begs the question of whether humans are hurt or even killed during the Grey’s experiments.

The response was both sobering and shocking.

“For the humans that do not make it through experimentation, they are given to the reptilians as a food source”.

“Unlike reptiles here on Earth, the reptilians will eat flesh that is not living but prefer the younger living flesh as sustenance known as karibakh (food) on Draco”.

“Our spirituality means nothing to the Greys. Understanding life is to better understand the universes. Yes universes, because there is more than one universe and more than one dimension”.

“So when they do an experiment there is no guilt or any remorse should a human perish but they are grateful to the host if that’s any consolation”.

“They don’t purposely try to hurt anyone but unfortunately due to our biological makeup, complications do arise because of the extreme experiments that take place”.

“Some specimens die from cardiac arrest and others die from acute reactions to their medicines. Most of the time, the experiments are on the brain and reproductive system”.

“There are approximately 30,450 humans that are chipped on Earth for reproduction and located for recollection”.

What Do You Mean By Relocation?

“They have taken back with them, approximately 250,000 humans to their planets. Yes planets. The Greys like other species, occupy multiple worlds, but their home planet is Zeta Reticuli.

“So far it has not been revealed to me as to what has or does happen to humans living on other worlds”.

“What they told me is that it’s a repeated process and it must be done in order for them to understand life on other worlds”.

The word alien and grey go hand-in-hand in “ufology speak”.

Where are they from? Are they interdimensional beings? Do they want to make the planet earth their own?

Bronson talks about the home of the grey.

Tell Us A Little About The Grey Alien’s Home World

“They have a two-star system and they refer to the closest star or sun to their planet as Tza and the second as Uma. It’s about the same distance from their planet as our sun is from ours”.

“Their closest sun is a lot cooler than ours so their planet is approximately 100 to 150 degrees fahrenheit cooler during their equatorial shift. It’s something like our winter and summer rolled into one”.

“Their planet doesn’t rotate like earth does. Its poles shift every 300 to 500 earth days depending on where their orbit around their sun is”.

“Both stars are less dense than our sun and the closest one, Tza, burns 50 to 75% less brightly than ours and the other Aurek, burns about 35% less than our sun”.

Are The Grey Aliens A Slave Species?

It’s often been documented that the grey alien is a sub servant of other species.

As mentioned earlier, it is one of several theories being suggested about who they are and whether they are a standalone race.

Are The Greys A Standalone Race?

“The Greys are not created by the reptilians to do their bidding as many books and articles have indicated”.

“They are their own species and have been traveling distant galaxies for millions of years”.

“The amount of time they have been traveling the galaxies and how old there civilization is needs some explaining”.

“It’s hard to conceive because their planet revolves around their suns differently. So in essence a solar year on their planet is 92 days as opposed to ours being 365 days”.

“It’s not hard to conceive that advanced civilizations are millions of years ahead of us. In this particular case, the Zeta Reticulans are 31 million earth years more advanced than we are”.

Is There Just One Species Of Grey Alien?

“Yes, when speaking of the Greys in general, they are very much confused with the tall greys”.

“The tall greys pretty much set the description after being portrayed in several movies such as Signs”.

“Of course the descriptions came from eyewitnesses who were abducted by those tall greys. In actual fact, they are from a totally different star system near Betelgeuse, from a planet they call Tregas Yeta”.

“The tall Greys are malevolent but nowhere near as much as the Reptilians”.

If the Greys are here to study and harvest human souls, then aren’t they here in essence doing the work of satan? That’s looking at it from a christian biblical perspective.

And what is the ultimate grey alien agenda of those in power on this planet who are working with them?

Does this have a good outcome for humanity or are we headed down an awkward path?

Alien abductions have been recorded for thousands of years. The theory put forward above as to why makes sense.

At least there is a purpose to it if that’s supposed to be some form of comfort.

The human soul is such a precious prize it’s value cannot be overstated.

It’s hard not to keep going back to biblical history. We’ve been in a galactic war since Adam and Eve were created.

Has it all been about the human soul?

I’d love to get everyone’s feedback.