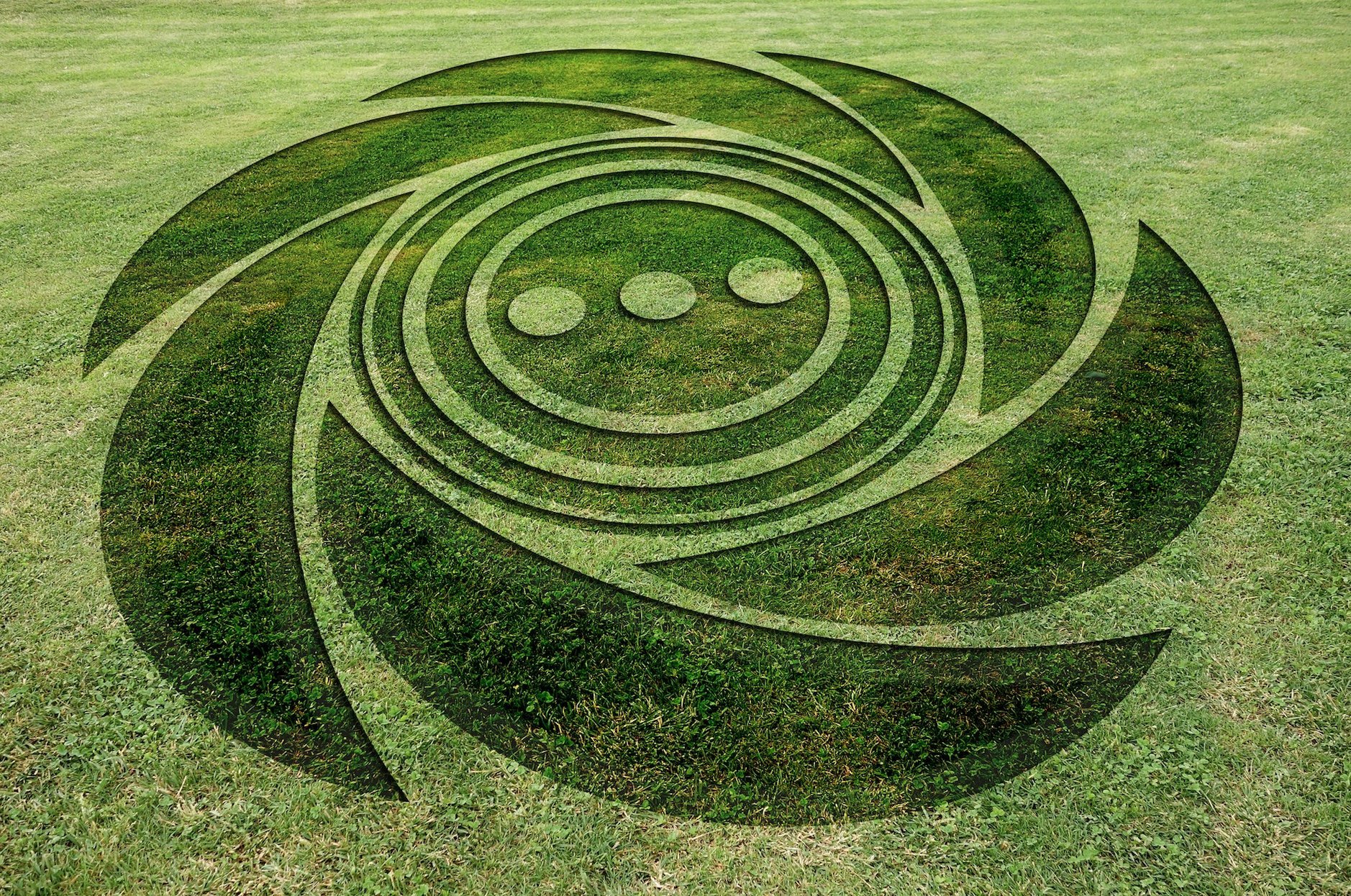 Deciphering the crop circle message has been an obsession for Jennifer Stein since they first appeared on the scene more than forty years ago.

While many have tried to decode the crop circle message, no one really has the answer despite some excellent theories being put forward by experts and students alike.

When Stein began her obsession with the mysterious circles, she read every book written on the subject by pre-eminent expert Colin Andrews.

And she followed the work of renowned researchers Terrance Meden, Busty Taylor and Linda Moulton Howe.

Fast forward to today, and the crop circle message still hasn’t been figured out.

In a recent interview with Stein during Aliens Revealed Live, the idea was suggested that perhaps if these crop formations were being designed from up above, maybe ET is just messing with our minds.

Or simply showing us that they’re creating crop circles simply because they can.

Stein wrote a long article just over a year ago for Phenomenon Magazine and spoke about synchronicity. It revolved around an opportunity she got around her 45th birthday to travel to England and meet with some of “her heroes”, and get a close up look at the mystery crop circles.

If there is a crop circle message she may have accidentally stumbled onto it during this time. Actually, she may have experienced it.

What appeared a pipe dream possibility for her took some amazing twists and turns and ultimately, she achieved what she so secretly desired.

Here is part of Jennifer Stein’s article titled “Synchronicity By Design” and the mysterious crop circle message she may have stumbled onto….. 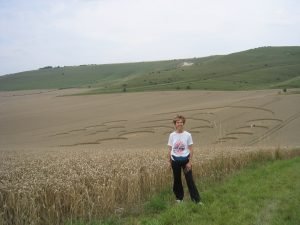 Where to begin, I thought? How do I get there? How do I find them, I must join a tour or trip that will take me there. I was a subscriber in those days to Nexus Magazine, and in the back of the journal was a small advertisement for a crop circle trip. I signed up, sent off my check and started to plan my adventure.

My husband was convinced this was all a lot of malarkey, that crop circles were all hoaxed and I was about to go trespassing on someone’s private property in England and get myself arrested.

To protect his dear sweet wife, he called a business associate who managed an electronic manufacturing facility in Reading England, not far from the central Wiltshire area where I would be trespassing onto those private farm fields. My husband’s request: “When my wife gets arrested will you go bail her out of jail and send her home?”

His colleague assured him it was not as it seemed, and England had a long tradition of walking trails and byways throughout the English countryside.

Unlike the U.S. Farmers often prepared once a formation occurred in their fields, proper trespassing allowance signs, rules and regulations….but he assured my husband if I was arrested he would be happy to come to my aid. His daughter was a local police officer, so he had an inside advantage with the English constabulary.

Still, I was handed a list of numbers with dialing instructions on how to use my British travel cell phone, in the unlikely event I was arrested, with explicit instructions on just what to do. I dutifully packed them away in my suitcase.

About a week before I was to depart for the trip, we received a letter from our same friend in Reading. It was a front page clipping from his local paper with a picture of a newly formed crop circle. It was a very complex, large, square, computer-like, grid formation.

This circle was more than 200 feet across. It was impossible to comprehend the complexity of just how it was made from the picture and article alone.

My mouth dropped open and I had a sudden realization that I had to get into this formation, but how? I would be on a tour with probably 35 other people and I could not necessarily direct where the tour should go.

Maybe it was out of the area we would be in. I had this sudden feeling that I should have just hired an independent guide to take me around Wiltshire alone, just me and my video camera, meeting the experts, researching on my own and filming what I really wanted to.

So I made a wish that if there was any way I could get in to that formation it would happen, and sent out my intention to the universe.

About an hour later Rubin Udarite called, the gentleman who would be leading the upcoming tour. He said he was calling with unfortunate news, that the trip had been cancelled. I was so disappointed and confused, saying  “What?! Canceled?!” 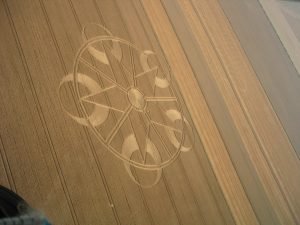 He patiently listened then said, “But Jennifer, I’m going anyway, and I know you don’t know me… but if you want, I can drive you around and let you see the formations you want to, and introduce you to the experts researching these formations.

It will be a totally different type of trip…if you’re still interested?”

Thirty-five people had cancelled. I could hardly believe it!  I just about fell over on the floor. This is what I had wished for not more than an hour ago!

How could my wish come true and so quickly? I started looking around behind me, checking to see if somehow there was a spirit with me, watching and listening to heed my every wish. I barely hesitated before saying, “Does a bear sh**t in the woods? Of course I will come!”

I packed the news clipping in my bag and never told my husband about the change of travel plans. I figured it would only complicate things and worry him needlessly. You know, I desperately wanted to see these formations first hand.

I knew he didn’t understand my passion, as even I couldn’t fully understand the impetus driving me forward. However, I did trust universal luck I was having, and went on planning to leave in just a few days.

Crop Circle Synchronicity On A Roll

I had the intuition the night before my flight to pack really light and carry on everything with no checked bags, just in case the flight would be cancelled or delayed, affording me a wee bit more flexibility.

I felt that in order to  make connection in Heathrow with Rubin I might need to change my flight plans.

Sure enough — my intuition was right on. We  had no sooner boarded the flight when they announced a possible cancellation or long delay due to thunderstorms in our stopover city of Chicago.

We likely couldn’t take off for several hours. I knew instinctively I had to get off of that plane.

Without a second thought I grabbed my bag and in 15 minutes had myself re-booked on another flight direct to Heathrow.

If I had not done so I would not have arrived in time to meet up with Rubin, and instead met him easily where I was supposed to and in perfect time. 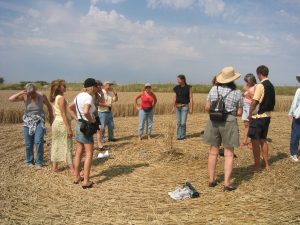 As we were driving down a farmers tractor road our first day, Rubin asked me if I had any specific place or particular circle formation I wanted to see.

I pulled the news clipping out of my backpack as the car lurched from one  muddy pot hole to the next on the lumpy, one lane, dirt road.

I said I wanted to meet Nancy Talbot and some of the other researchers and film how the actual research was conducted.

Then I showed him the article about the computer grid, further explaining what happened when I received the clipping in the mail and my wish to the universe to make a very different type of trip than originally planned.

As we lurched forward from one pot hole to the next, a van started coming towards us down the single lane. I looked at Rubin with a worried look, “What do we do? Who backs up?”

It was impossible to pass each other. Rubin calmly said “Oh this happens all the time, we will figure it out.”

He slowly edged the small car part way into the field to allow passing room for the other vehicle.

And they did the same with both cars stopping as we slowly attempted to pass each other.

To be careful Rubin completely stopped to let the van more easily pass. He rolled down the window to watch the narrow gap up close.

We were lucky we hadn’t already tipped over on the steep angle of the road’s edge.

The van stopped too, the window rolling down — and it was Nancy Talbot!

She yelled, “Rubin, great to see you! What are you doing tomorrow? Can you and your friend come out to the computer grid tomorrow and help me gather samples for Levengood?”

I held up the news clipping in my hand and said “Do you mean this formation?”

As Nancy drove away, I sat stunned and speechless with an astonished look on my face. What had just happened?

With Rubin now as my witness, I said “Did that just really happen?”

Rubin just looked at me with an excited giggle and grinned – “Welcome to Wiltshire Jennifer. And the magic of the crop circles.

This stuff happens all the time to those that come into this mystery of exploration. It’s a lot more than just the patterns on the ground.”

Again and again throughout the entire 8 days I spent in England I experienced unbelievable synchronicities, one after another!

My thoughts seemed to be manifesting into a dreamlike reality that was unbelievable and magical. I became very aware that something very deeply spiritual was happening to me.

A large, expanded and conscious understanding of the inter-connectedness of all things was permeating my awareness.

It was on both a conscious and subconscious level and was frightening and enlightening at the same time.

It was a precipice I had willingly stepped off from and there was no going back. That brief time in the English countryside profoundly and forever changed the course of my life.

Perhaps in part by my own unwitting design.

What Was The Crop Circle Message?

Crop circle message or not? Perhaps it’s not so much a message that crop circles contain but maybe it’s just the mysterious energy within and around them.

Synchronicity by design? Seems so in this case from the moment Jennifer Stein said yes, that’s what I want. It’s amazing how doors and paths seemingly open up when you make a decision and commitment towards something.