Aliens In The Bedroom – The Night The Monkeymen Showed Up 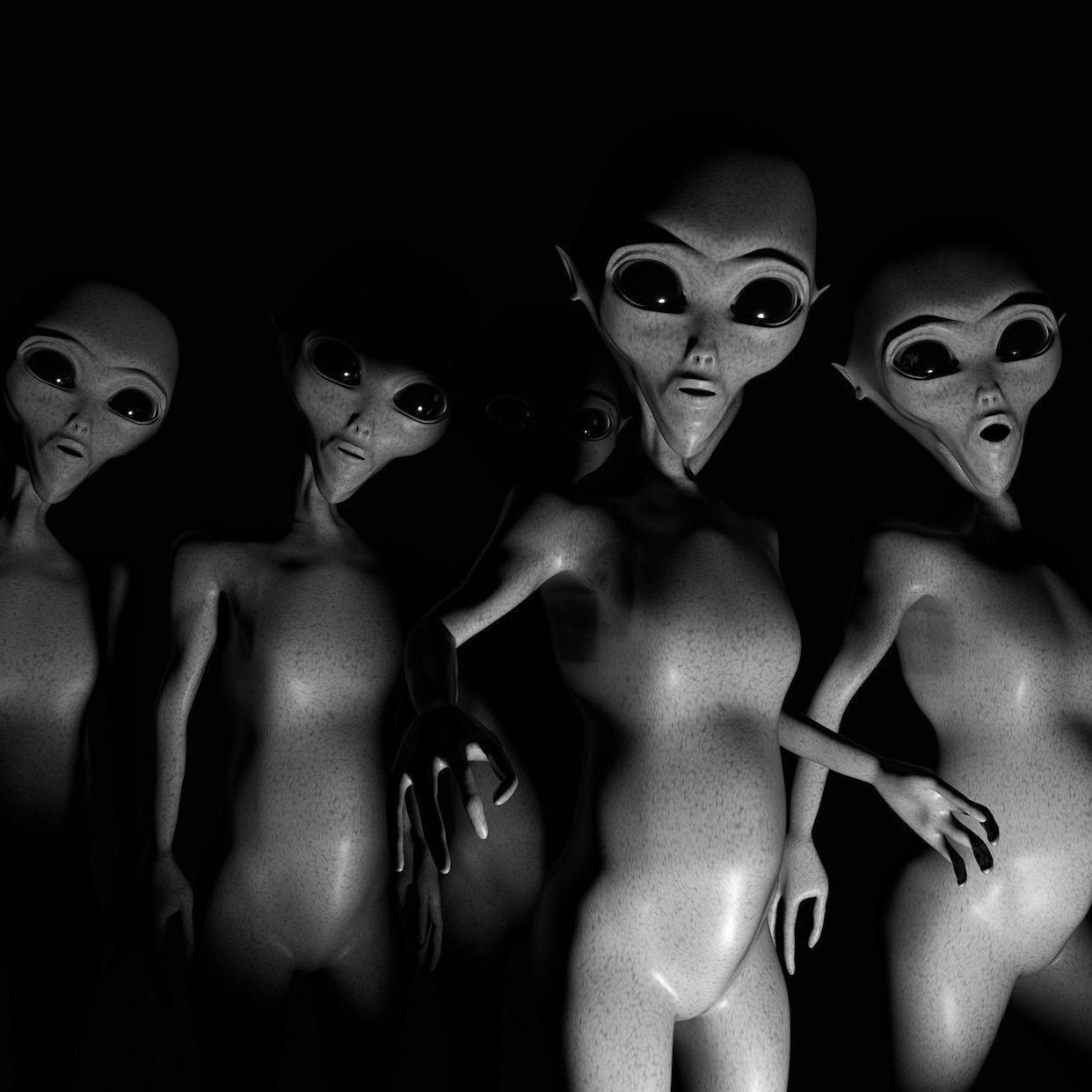 Terry Lovelace’s experience with aliens in the bedroom as a child set off a lifelong chain of events.

The former Assistant Attorney General has spoken up in recent years. His alien contact experience as an adult at Devil’s Den in Arkansas in 1977 made worldwide headlines completing a famous trifecta of alien abductions.

It followed on from the Pascagoula and Travis Waltons incidents during that period.

While on active duty in the United States Air Force, Lovelace experienced an encounter with “not so friendly aliens”. It’s only been in recent years that he’s come forward to tell his story releasing the book Incident At Devil’s Den.

His experiences go back well before Devil’s Den. During a period between 1962-64, Lovelace had his first encounter with aliens.

As a child, it was a terrifying experience and he referred to them through a child’s eyes as monkeymen.

Aliens In The Bedroom

Lovelace forwarded a short story based on his childhood events as described in Incident At Devil’s Den – A True Story to Aliens Revealed Live.

He describes the aliens in the bedroom, an encounter with a UFO and a terrifying abduction he experienced – all before the age of ten.

In this article, we’ll present the first of his experiences when he was just six. He lived with his family in a two-story home in St. Louis and says up until then, everything was normal.

Like all kids, he had those familiar “monster under the bed” fears but his experience was soon to become all too real.

Lovelace says it was a normal school night and his dad had just assured him that monsters aren’t real and nothing from the sky could hurt him.

As Lovelace puts it, he was about to prove his father wrong.

The Aliens Show Up In His Bedroom

“I recall it was a school night. My mom tucked me in with a goodnight kiss and shut my door. My room was dark except for what filtered in from the streetlights outside my second story window. It was enough light to cast distorted shadows, but I was grateful to have just a bit of light for comfort”

“I hadn’t watched anything scary on TV that evening. It was a normal night in all regard except I felt uneasy for some reason. It took longer than usual to get to sleep that evening”.

“In the middle of the night I woke up. The house was dead silent and I don’t know what woke me, but I sat up in bed and listened. Everything seemed normal but I felt unsettled again. I stared outside the window from my bed at the treetops and they were still too. It hadn’t been the wind”.

“Then from the corner of my eye a shadow moved. I jerked my head to the right but nothing was there. My bed was close to the wall and in a corner. Out from the darkness stepped four little monkeys and I was astounded. I was fully awake and these were real monkeys with long tails!”

“They were about two feet in height, maybe a few inches more. Their eyes glowed yellow and they were wearing paper masks with broad smiling grins painted on them. All of it felt surreal and somehow familiar”.

“I wasn’t afraid! Circus monkeys aren’t mean, they are playful and they don’t hurt children. But why were they in my room? They must have escaped from a circus, maybe I could take them to school with me!”

Aliens Get Close Up And Personal In The Bedroom

Lovelace says at first they looked comical before they stepped out from the shadows. He says they formed a semi-circle around his bed.

“They stared at me and I stared at them. Then they tilted their heads left and right, the same way my dog would do sometimes. They seemed friendly and the one closest to me spoke up but his lips never moved”.

“I heard him as plainly as any spoken word and he asked, ‘Terry, won’t you come with us? We’ll go and play for a while and bring you home!’”

“I was warned to never go with strangers but I felt like I knew them. I wondered, ‘Had I gone with them before? This wasn’t the first time.’”

“They inched closer to my bed. The one closest to my head spoke again, ‘Terry, come with us and play? We’ll have fun and you’ll be back in just a little while’.”

“Then I thought, ‘No, this isn’t right!’ I shouted, ‘Go away…this is wrong’ and ‘I don’t know you!’ It was then their expressions changed”.

Terror Sets In For A Small Child

“Their friendly smiles turned into a grimace. Their yellow eyes turned almost black like my cat’s eyes when their pupils dilate. There were four of them and just one of me”.

“What would happen if they decided to just take me? They could carry me away and I’d be lost forever in that place where missing children are taken and never found”.

“Now I was frightened. It felt like a stand-off and I panicked, ‘mom, dad come help … they’re here, they’re here!’ I woke the entire household and perhaps even the neighbors”.

“From the crack under my bedroom door I could see light pouring in. The hall light was on and there were footsteps down the hallway now. In an instant there was a twirling of shadows and they were gone! They retreated into the darkness and back to wherever they came from. They were always gone before the doorknob to my room turned”.

“My door opened and a flood of light from the hallway poured into my room. For an instant I was blind, but it was okay. The light was warm and friendly”.

“I felt like I was in my room and safe. I don’t remember crying. Tears flooded my face as I clung to my dad as hard as I could hold him. He was bigger and tougher than the monkeymen. That’s why they ran from him!”

They Didn’t Believe Him

What followed for Terry Lovelace was a period where no one believed his story. But it’s interesting that King, his German Shepherd, who slept in his room never woke.

More interesting is that King never wanted to sleep in his room again. Lovelace said he would rotate and sleep with someone different every night but never again with Terry.

Lovelace says the monkeymen came for him five times over a two week period. The family was getting fed up with being awakened at night from Terry’s screams including his two sisters. His father eventually said he could no longer share his parents bed.

The following conversation took place between Lovelace and his mother. He says she held him back from catching the school bus one morning to talk to him about the monkeymen.

“She was genuinely curious about the monkeymen. I was eager to tell her everything I knew. It’s funny I could never recall where the monkeymen took me. I wanted her to believe me. I was awake when these things happened. These weren’t bad dreams”.

She pressed on, ‘Terry, are these monkeys like the ones on TV or the ones in the zoo?’”

‘No momma, these are the monkeymen and they want to take me away somewhere. They tell me we’re going off somewhere to play and they promise to bring me back before morning,’ I answered sincerely trying not to cry”.

‘If these monkeymen take you, how do they get you out of the house without waking King? Where do they take you?’”

‘I don’t know momma. I can never remember where we go or when we’re coming back home. I just wake up and it’s morning’, I said honestly”.

“Terry, you can tell them, ‘Go away, I don’t want to play with you, go away and never come back!’ She slammed the palm of her hand on the table to emphasize her point. I took it as anger. It just made me cry”.

‘Yes momma, I’ll try,’ was the best I could get out, risking full-blown sobbing now”.

“Why Do You Call Them Monkeymen?”

“She softened her tone, ‘Tell momma, why do you call them monkeymen if they’re just little monkeys?’”

“I had never thought about it before! The origin of monkeymen was a mystery to me then and remained so for decades. Her question took me by surprise. Thinking about it hard for a moment I tried to explain, ‘The monkeymen aren’t like animals, they’re not like King. They are smart enough to talk to me, but they never move their lips. They talk behind their eyes’.”

“That was it. Game over and any credibility or empathy I hoped and prayed for vanished. Gone like the monkeymen when the lights turn on. My mother wiped away my tears and I was whisked into the station wagon headed for school with a note to explain being tardy”.

The next phase in Terry Lovelace’s includes a UFO encounter and a disturbing abduction experience involving preying mantis-like aliens. Watch this space.