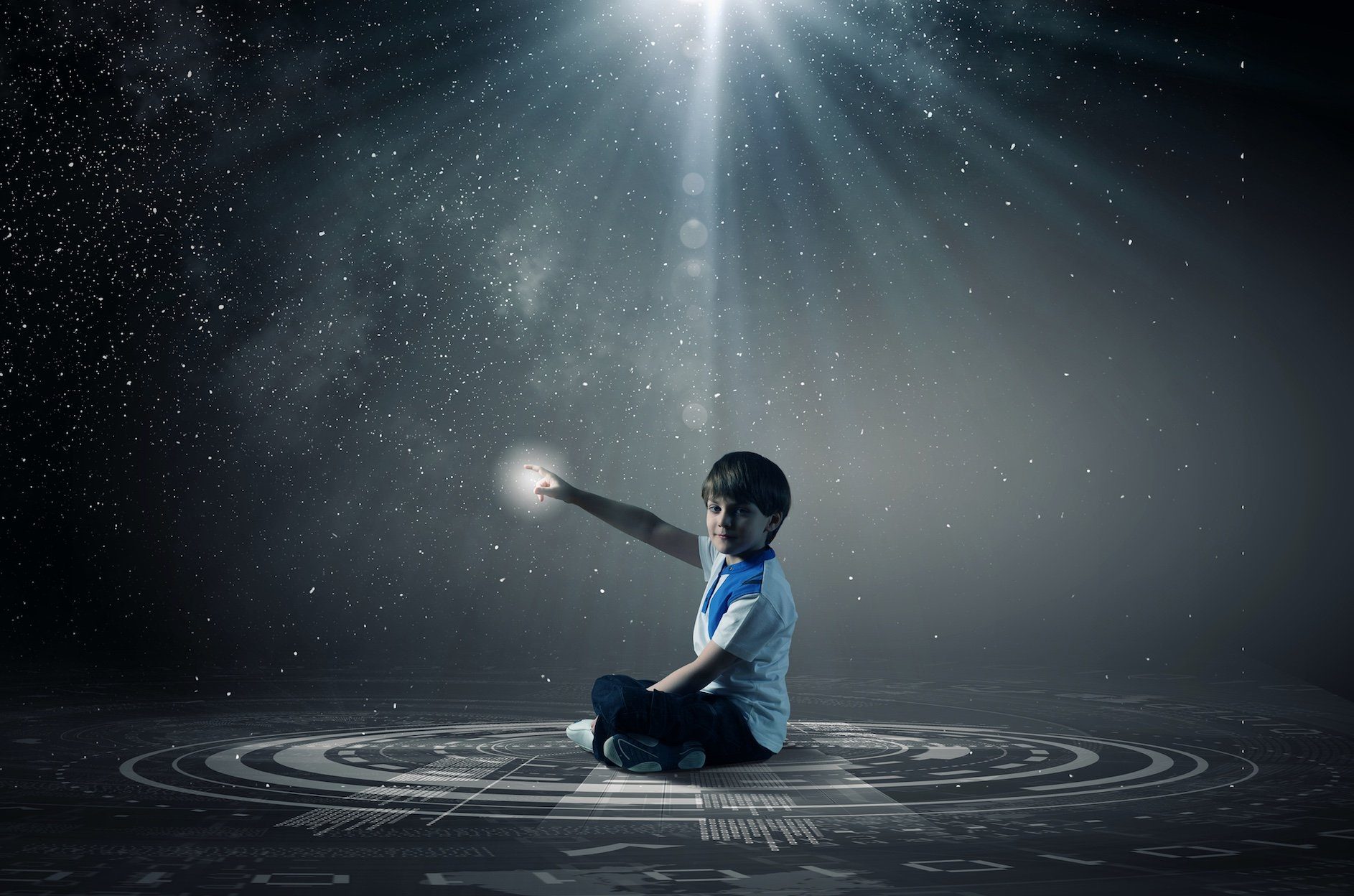 Alien encounter stories don’t get more mesmerizing than those experienced by Terry Lovelace.

Most of us know about Terry’s terrifying experience at Devil’s Den in Arkansas during 1977.

Lovelace has been a virtual lifelong experiencer. In the first article of this three part series, we told you about his first meeting with what he termed as the monkeymen.

It’s titled Aliens In The Bedroom – The Night The Monkeymen Showed Up.

Alien encounter stories come in all shapes and sizes. In the case of Terry Lovelace, a man who has built a very successful career in law, it seems they never let up.

As we resume the story, Lovelace had just tried to convince his mother that the monkeymen were real.

In fact, he had a hard time convincing anyone. At just six years of age, stories such as his are dismissed as vivid imagination.

Protecting Himself From His Next Alien Encounter

Shortly, Lovelace will explain the next significant moment in his life littered with alien encounters.

But first, he decided he had to protect himself.

He found his dad’s gun and planned to have it by his side the next time they visited. He had resigned himself to going with them every time they came to visit.

The gun idea soon turned sour. Lovelace and his friend Ernie Pearce, the only person who believed his alien encounter story, almost shot one another by accident during a scheduled practice session.

The next two ideas for protection weren’t as extreme but dangerous nevertheless. A knife or a bayonet, belonging to Ernie’s dad.

Alien Encounter Stories In The Sky

Terry Lovelace was seven when the next influential alien event occurred in his short life. Up until this stage, he had never anticipated meeting aliens in his bedroom.

He always thought they traveled by spaceship. Up until the following experience, he had remained conflicted because of this. The ones who came to take him regularly never arrived by spaceship.

Lovelace just assumed they were ghosts or demons. But that all changed.

“This was when one of the most extraordinary events in my life occurred”, he said.

“If you’ve read Incident At Devil’s Den, you’re familiar with the experience. I’ll try to be succinct here”.

The Day The Flying Saucer Turned Up

“It was a warm day in May and I always remembered it as a Saturday. But it must have been a weekday”.

“It was after lunch. Our windows were open, and I could hear my mom’s soap operas through the screen windows, hence my assumption it was a weekday”.

“The neighborhood was active with dogs, kids, cars and people outside enjoying the beautiful spring day”.

“I had a bale of hay in our backyard set-up as a target. My uncle had given me an adult target archery set. This was no toy and no way would I ever give my children such a lethal weapon at that age. It really was a different time”.

“I was by myself and Ernie was on a trip to “the lake” for his final vacation. He drowned that summer and introduced me to loss and grief”.

“But on this day, all was right with the world. I hadn’t had a visit from the monkeymen in a week or ten days. Everyone took that as a hopeful sign”.

There wasn’t a cloud in the sky that day. My attention was 100% devoted to my target practice”.

“Looking down and loading an arrow I saw a circular shadow move across my feet. Instinctively I looked up”.

“There it was. A flying saucer and it was beautiful. Awestruck, I dropped my bow and arrow as my eyes tried to take-in every single detail. What could this be?”

“I quickly ran through my mental list of possibilities and ran out after eliminating hot air balloons and dirigibles. Flying saucers were the only possibility left on the list”.

The Sexiest Of Alien Encounter Stories?

“Today, I’d call it ‘sexy’. That wasn’t yet in my vocabulary at age eight”.

“It was shiny and just beautiful in the way a new sports car is beautiful. It was metallic with a rim that curled upward”.

“I remember being sorely disappointed I couldn’t see the topside. That would have to wait. I was amazed there were no portals or window, nor rivets or seams. I called the bottom silver. Of course, it was probably highly polished aluminum or god knows what”.

“What I failed to adequately describe in the Devil’s Den book was the change to my environment. This made the difference between a flying saucer sighting and a UFO experience. This was a sensory experience”.

“There was a change in the acoustics. I stated in Devil’s Den the neighborhood became quiet. That’s inaccurate”.

“It was more as if the sound was muffled. It was as if someone dialed down the volume and words were slightly distorted. There was the ionized air that made it feel like a sensation after a spring thunderstorm”.

“Then I did something that baffles me to this day. The thought crossed my mind that if I lay down on the freshly mowed yard and looked up, I could get a better view of the thing”.

“Of course, that made no sense whatsoever. But that is exactly what I did. I just laid back on the grass, but I can’t recall lying down”.

“The yard was freshly mowed, and I knew there would be hell to pay if my mother discovered grass stains on my clothing, but I didn’t care”.

Again No One Believed His Alien Encounter Story

“I can’t recall how long I laid there. Maybe a few minutes or as long as a half-hour. The disc wobbled in the breeze just slightly”.

“It tilted to clear the power lines and without warning shot off. The craft went from dead still to 500 miles an hour from a dead stop. It would have been missed in the blink of an eye”.

“I lay there for a while. Slowly the sounds returned and I could smell the fresh mowed lawn. The ionized air was gone. My gaze was fixed on the hole in the sky where it vanished”.

“Then it was as if someone snapped their finger and I was back. Jumping to my feet I yelled for my mother. My poor mother admitted afterwards she feared I’d shot a neighbor in the head with an arrow. She came running and did a quick assessment for blood. Finding none, she shifted her attention to stifling my screams”.

“I don’t remember screaming but I’m sure I did. She ushered me inside – more accurately she dragged me inside by my arm. My head was turned, and my eyes were glued to the spot in the sky where the flying saucer had vanished. I was about to learn what happens when you used the word flying saucer in 1963”.

“I was out-of-control with excitement. ‘Mom, did you see it mom? Was it a real spaceship? Do you think it came from Mars?’”

“But this was the 60s and children’s voices were discounted. Anything out of the ordinary drew the same line, ‘Oh that boys’ got him such a vivid imagination, I tell you!’”

“Even though my parents left rural Arkansas shortly before I was born my mother never lost her “country” and carried it the rest of her life. I was raised in a family that spoke like the television series ‘Hee Haw’.”

On my first day of school, my accent drew teasing and ridicule. My parents couldn’t understand it! I had no accent!”

“After dinner when my dad watched Huntly and Brinkley, or Walter Cronkite, I listened intently to every word and its enunciation”.

“They were amused that a young child watched the news”.

“It didn’t take long to lose my ‘country’, and speak as well as any news broadcaster of the day. My vocabulary was limited, but enunciation was spot-on”.

“After the flying saucer experience, I was shocked to find that adults didn’t believe me!”

“I had a good reputation. I didn’t lie or tell stories”.

“But they refused to believe me, and I couldn’t understand it”.

“There was another unforeseeable consequence of the flying-saucer experience. Dreams”.

The next and final phase of this period of Terry Lovelace’s alien encounter experiences goes to another level.

Stay tuned for the third part of one of the most fascinating true alien encounter stories ever published.

You can read more about Terry Lovelace’s close encounter experiences in his book, Incident At Devil’s Den.